Jump Back to the Action: 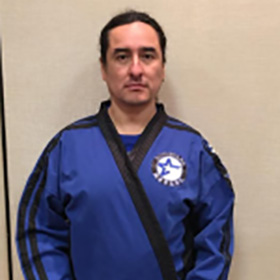 Sensei Enrique has been an instructor with ACTIVSTARS since 2015.  He has over 30 years of Martial Arts experience.

He started with Karate Shotokan at age 9 and moved to Kung Fu when he was a teen. Enrique began taking Tae Kwon Do classes before graduating from high school and started participating in regional and national tournaments. In this time, he earned trophies and medals for his school “Zen Bu Kan” (The Warrior’s House), and for “Club Cinturones Negros” (Blac Belt School).

Enrique obtained his black belt certification from Kukkiwon, Korea in 1998, and soon after he accepted an invitation to participate in an International Taekwondo Open in Las Vegas. He relocated to Columbus, Ohio, and attended Team Players, of masters Larry Lucas and Robert Irvin.

Kids benefit in big ways from our programs

"We love the different levels, and our star looks forward to each semester where she gets to learn something new. Pom tryouts were a nice touch."

"The best thing any young cheerleader can do to get ready for their school’s cheerleading tryouts."

"Big emphasis on teamwork and fun, which you don’t find in many programs. Thank you for being so inclusive."

Find a Class Near You
Register for a Class or Event